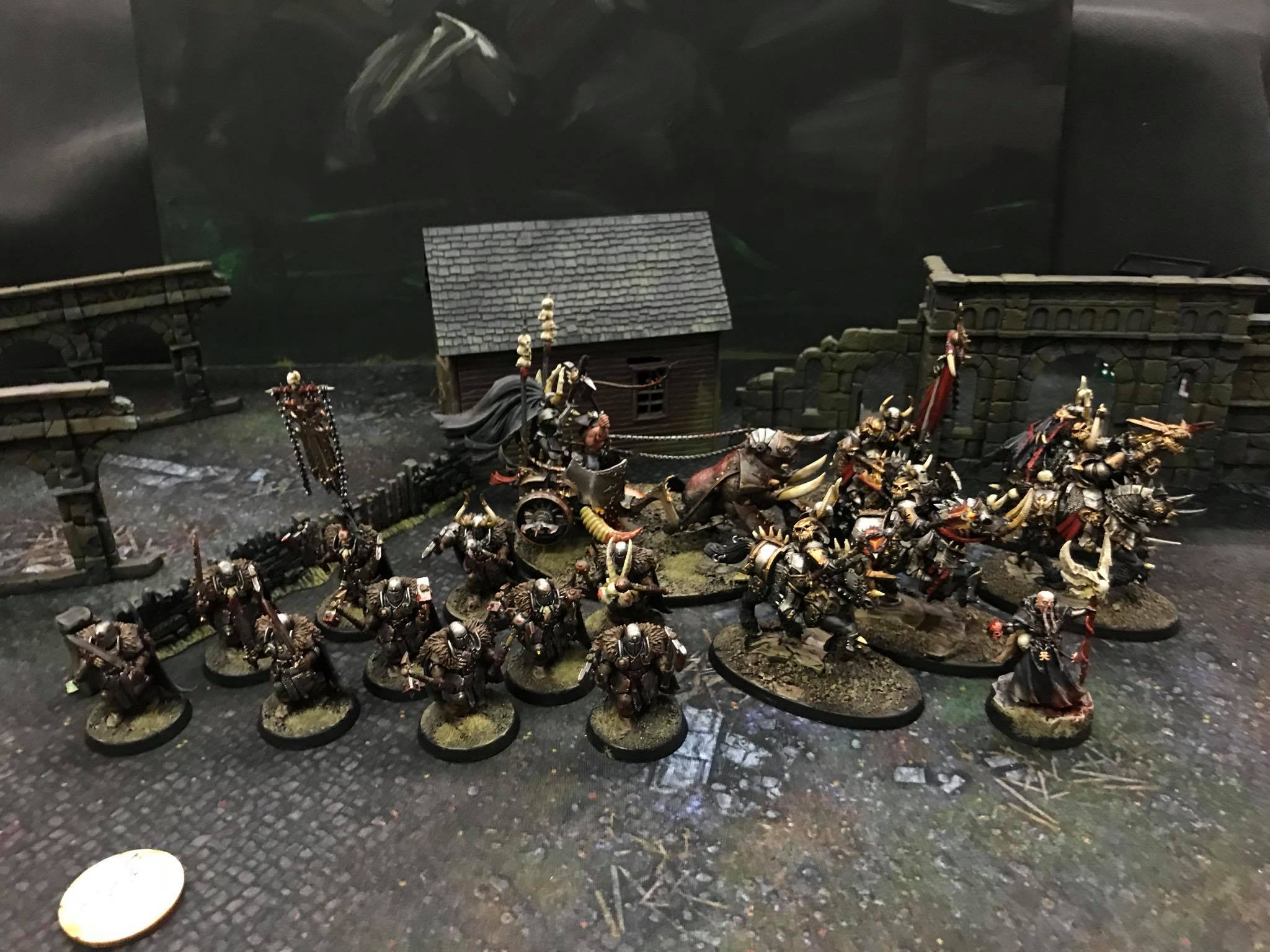 AOS(age of sigmar) is the latest edition of gamesworkshop’s warhammer fantasy universe. Many players(including me, initialy) were and are turned off by the overly gaudy models with their garrish paintjobs and oversaturation of visual detail. I realy hate how over the top and needlessly huge the “new stuff” is. either way.

Slaves to darkness are about as general as chaos factions gets. I wanted something with ostentation(sigmarines, aka the littleral golden boys) and something built to fight.

Marks of chaos and your army.
For some of you this is old news so skip this. You essentially have 3 choices, disease((nurgle), magic(tzneetch), murder(khorne) and vice(slaanesh).I wanted a fight force with lots of straightforward combat and none of the denial of possibilities, just dudes fighting. So I built my army around the chaos murder god as that will give me acess to stuff that will get lots of dice bonuses and is the closest thing to a god of “fighting for fight’s sake” which is all my little plastic guys are here to do!

So more or less I try to maximize my dice rolls instead of turning to tricks or ways of negating/debuffing my enemy. I am here for a “good clean fight.”

I prefer the older model’s look so I chose a subfaction within the “chaos” group to focus on, the “slaves to darkness.” Men who for whatever reason have lost themselves in the frenzy of battle and become consumed by it in one way or another. Basing their look and feel, lots of leather and dirty steel off the saxons from the 2004 king arthur film. Ocasionally varying where lore needs me to amp up the blood on certain models.

I try to more or less forget about all the “demon” stuff. Seeing my “demon” as an avatar of their god made flesh.

SO! WHAT TO BUY! PAINT, brushes, hobby tools etc!
GET the start collecting “slaves to darkness” box as this will give you a solid start. for years people cried about prices, these are deals, you are getting a lot for your money! a fully playable force comes in the box if you do the following assembly

The slaves to darkness start collecting box contains the following:
Chaos Sorcerer Lord(never used him)
a Chaos Chariot(strong but situational)
a set of 5 Chaos Knights(solid model but expensive)
a set of 12 Chaos Warriors(the core of your force, you can build into 2 5 man units with 2 extra leaving you only one left for battle line requirements!)
War scroll Battalion rules sheet(not sure if still valid but the rules are strong), I don’t like the chariot with the horses so it is useless for me.
Honestly, buying 2 of these is not a bad idea! I REALLY HATE that we get stuck with 2 sorcs though, but hey, you can make one for slaanesh and one for tzneech, so there is that)

within each unit you need to at least have the same weapon options selected
my SUGGESTION, is 3 guys sword and shield, 3 guys 2 hand weapons, 2x horn blower, 2x standard bearer, 2x aspiring champion, this is the body with the raised arm)

chaos chariot(the one with horses)

sorcerers cannot be mark of khorne btw. khorne hates this but as slaves to darkness is a mixed(read general) army) just make him whatever mark you want.

that is all that is required, clearly you also get 5 knights as well! so you have a little extra!

my suggestions for expansion are the following:
Imma preface this: I dislike demons, I was raised christian and that sort of evil still makes me winge a little, however, it is just a game, so maybe it is best to call it a dark spirit or avatar or similar..

You absolutely should grab:
Chaos lord on manticore
MORE CHAOS WARRIORS!(you need 3x for your “battleline” if you option for a gorebeast chariot, anyway)
Find a bit seller on ebay, you’ll want/need them!